The objective of the project is to investigate accidental death in its social context in sixteenth-century England through the coroners’ reports filed in the records of the court of King’s Bench. The project aims to document the nature of hazard and risk across the nation in Tudor England and to use this to draw a picture of everyday life. It will also highlight the similarities and differences between rural and urban society and between different regions of England, examine trends in hazards over the period from 1500 to 1600, and compare historical risk with modern risk. The main output from the project will be a monograph for submission to a major academic publisher. The core of the argument of the book will derive from the statistical findings, but its presentation will include illustrative anecdotal detail. The data from the inquests will be also made publicly available through an online database.

Different European historiographical traditions have bred different ways to investigate the everyday lives of early modern Europeans. The Italians have developed microhistory, the French practise Annales-style structural-conjunctural analysis or the material-cultural history of consumption, the English ‘Cambridge school’ excel at demographic reconstruction and the Germans have forged an ethnographic, folkloric, gendered Alltagsgeschichte. The major studies which have resulted have rested on different sources such as inquisitional and legal records, tithe accounts, probate inventories and parish registers. Naturally, they focused on different aspects of the life of ordinary people, some stressing beliefs, rituals and customs, others social relations, obligations and hierarchies, others again birth, death and marriage, or food, drink and shelter. Historians of early modern England have relied on and made excellent use of the records of the precociously centralized Tudor state, but the potential of coroners’ reports – where economic activity meets domestic life and leisure in the context of social relations, technological circumstances and local topography – has not been fully exploited.

While a number of studies use data extracted from medieval and early modern inquests, none of them do so on the scale and in the manner envisaged in this project. Michael MacDonald and Terence Murphy (1990) have used the 12,363 suicides reported to King’s Bench and two comparable jurisdictions between 1485 and 1714 to reconstruct the practice and meanings of self-murder. S.J. Stevenson (1987a; 1987b) has made a more intensive study of suicide and its reporting in nine counties over three decades in the sixteenth century. Keith Challis (2005) has used the 67 accidental deaths reported from the River Trent and its tributaries between 1485 and 1558 to examine how people used and crossed the river. The broad outlines of change between sixteenth-century and modern patterns of fatal injury have been sketched by Elizabeth and John Towner using Hunnisett’s printed Sussex inquests (2000; 2008). In the most wide-ranging study, Barbara Hanawalt (1986) has used 3,118 accidental deaths recorded in coroners’ rolls between 1265 and 1419 to investigate family life, work and leisure amongst the later medieval peasantry.

The project aims to ask a far wider range of questions than the existing studies about what it was dangerous to do in sixteenth-century England and why. Conclusions based on data collected thus far suggest that work-related accidents were in many ways what could be expected: building, mining and milling, felling trees and handling animals, fishing from boats and cooking on open fires all posed hazards. But so, with astounding frequency, did fetching water from streams, ponds and wells or washing in open water after a hard day’s work. Transport was a danger then as now, with falls from horses and runaway wagons, but also mishaps in the dark on moonless nights. So were leisure activities, not just archery and football, but swimming, bell-ringing, riverside flower-picking and getting too close to performing bears. These hazards varied across the country with different agricultural regimes, different kinds of livestock, industries, sizes of settlement, sources of water, landscapes and climates; they varied through the century with economic, social and technological change. 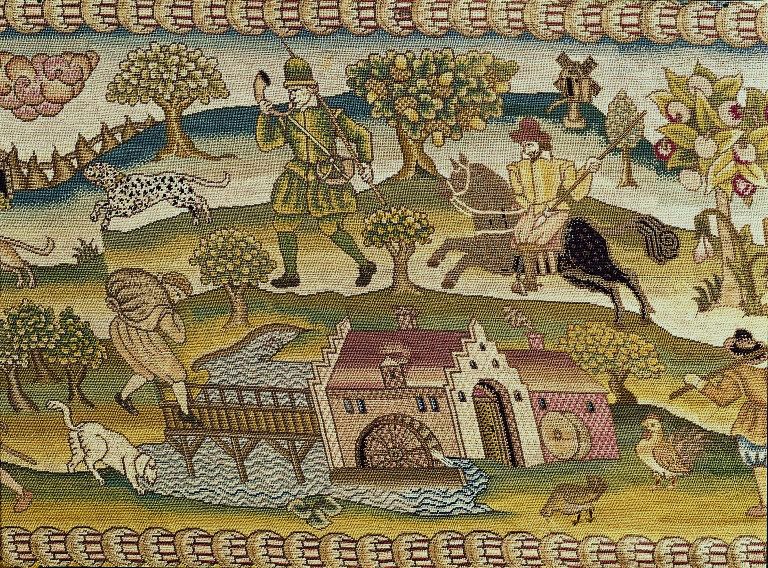 The reports also provide rich detail about which people met with which sorts of accidents – old or young, men or women, rich or poor, healthy, epileptic or infirm – and how each accident happened. At what time of day did people pursue different activities, at what season, on what day of the week, whereabouts in their town or village, in what company and how far under the influence of drink? What exactly was it about sixteenth-century watermills or wells or horse-handling that made them dangerous? Targeted research will inform richer description of these contexts where appropriate sources survive, enabling us to squeeze maximum benefit from the detail supplied by the inquest reports.

Work on coroners’ reports starts with identifying and digitally photographing ones dealing with acidental death. Details of each accident are then entered into an Excel spreadsheet. Data fields in the spreadsheet include the TNA reference for the inquest report, the name, sex, age, occupation and place of residence of the victim, the day, date, time and location of the accident, the date of death, the fatal injury or cause of death, the activity undertaken by the victim at the time, the number of other people present and the cause of the accident, with additional fields for additional causes (for example cases involving falls from horses into rivers) and for the entry of text to record any unusual details. The date of the inquest hearing and the name of the coroner are also recorded to enable investigation of the significance, if any in this context, of the variations in efficiency between coroners. Digital photographs will enable their consultation for details of any particular incidents not recorded in the database but needed for illustrative purposes in the book. Once computerised, the data can be classified according to the 2008 modern hazard classification scheme and a second scheme developed to allow for historical risk conditions. 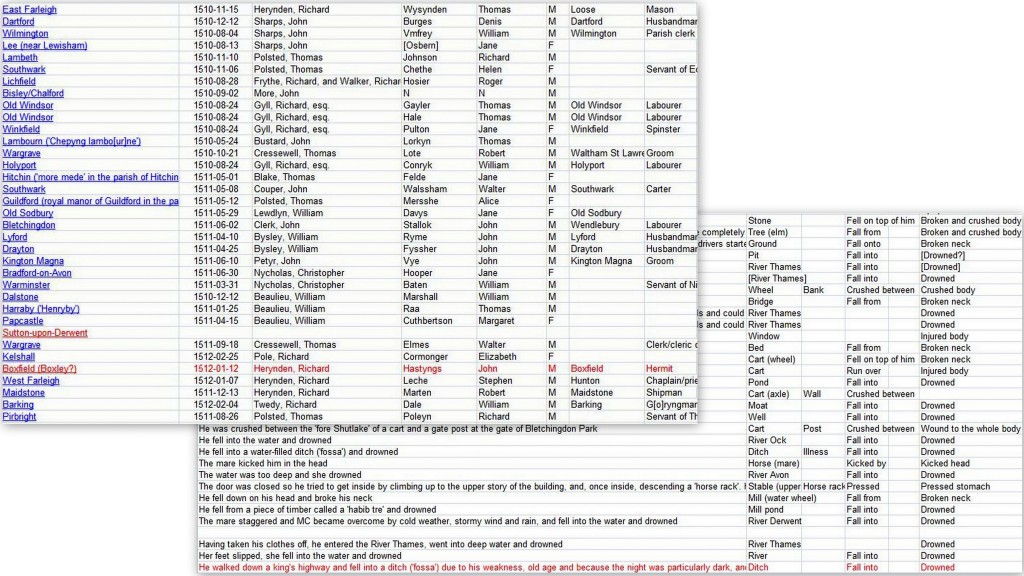