FROM SCYTHES TO RAT POISON. Steven Gunn talks about THE UNUSUAL WAYS OF DYING IN TUDOR DORSET AND WILTSHIRE. The podcast was followed by a lecture for the Shaftesbury and District Historical Society at Gold Hill Museum, which you can read more about here: https://goldhillmuseum.org.uk/shaftesbury-miller-meets-unfortunate-end/ ‘The two halves of Wiltshire’, explains Steven Gunn in the podcast, ‘have very different kinds of accidents because the farming systems are different […] The downs is a lot of sheep farming, the clay vales is a lot more farming with cattle and cheese-making. So characteristically on the downs if something falls on you it is going to be a big stack of wheat or barley. If something falls on you in the clay parts of Wiltshire, Bradford-on-Avon and so on northwards, then it is more likely to be a pile of hay.’ 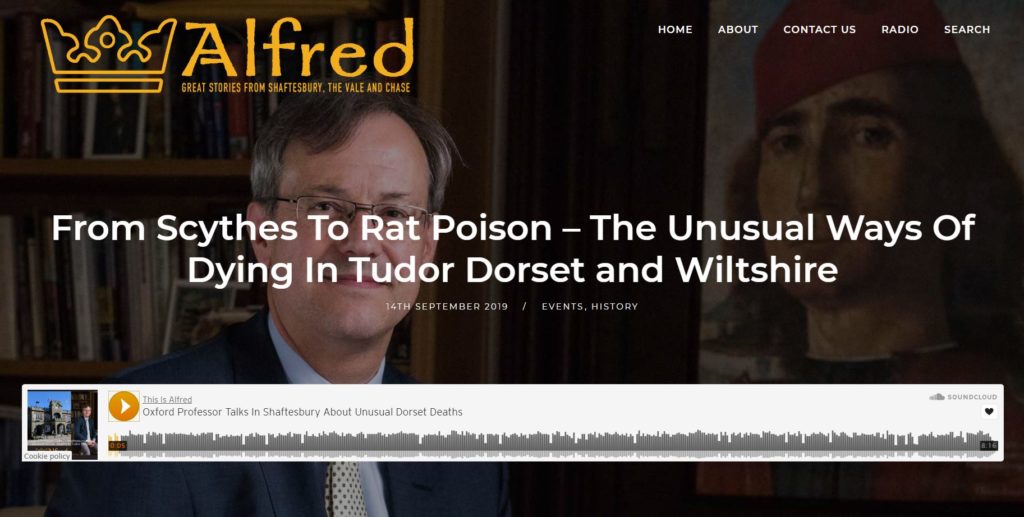 Click to listen to the podcast. Opens in a new window.

Steven Gunn talks about EVERYDAY DEATH IN SHAKESPEARE’S ENGLAND as part of the Shakespeare Oxford 2016 series at the Bodleian Library. ‘There were all kinds of ways to die and people were probably more familiar with death in their everyday life than we are today […] What I have spent the past few years looking at […] is people dying in accidents. People die in plague in lots of similar ways by and large. People die in accidents in an enormous variety of different ways and thankfully the government wrote it all down for us. Because in the sixteenth-century like today if you die in a sudden or unexpected way there would usually be a coroner’s inquest […] We have about 9,000 of them from the sixteenth century.’

Steven Gunn talks about ACCIDENTAL DEATH IN TUDOR ENGLAND during DeadFriday on 30 November 2015 organised jointly by the Oxford Research Centre in the Humanities and the Ashmolean Museum. ‘What we would like to do is to tell you a little bit in the time we have got about the project that we have been running looking at accidental death and everyday life in sixteenth-century England […] Slightly depressingly historians have been interested in the murders because they tell us whether we have all been getting more or less violent over time. They have been interested in the suicides because they show whether we have all been getting more or less suicidal over time but they have not for this period shown much interest in the accidents which actually show what people were doing all day.’

Steven Gunn in the BBC documentary THE HIDDEN DANGERS OF THE TUDOR HOME presented by Suzannah Lipscomb. ‘Dr Steven Gunn is conducting important new research into some 9,000 coroners’ inquest records from around the country during this period. These documents are a unique source of statistical data about Tudor life and provide a whole new insight into death in the Tudor home.’

Steven Gunn analyses ACCIDENTAL DEATH IN TUDOR TIMES and talks about the PERILS OF WATER IN THE SIXTEENTH CENTURY.